This post is part of an ongoing series of posts from parents.  We are so excited to be sharing some thoughts and stories from some parents who are deep in trenches of their child’s robotics journey.

My name is Oscar. This is the story about how my son, Tyler, discovered his passion for robotics, specifically VEX IQ, and what we have learned along the way.

My son, Tyler, first became intrigued with LEGO when he was still very young. He got his  first LEGO Duplo kit when he wasn’t even a year old. When he was five, one of our friends took us to a FIRST Robotics competition. Tyler was truly mesmerized by the robots, and this is where his love for robotics began in earnest.

Later that year, we decided to enroll him in our local library’s FIRST LEGO League Jr. Program. It was no surprise to me that Tyler loved the program, but unfortunately the library’s offerings didn’t go beyond beginner level. I looked around for other options but couldn’t find anything in the neighborhood.

I decided to form our own group with Tyler and three of his LEGO-loving friends. From there, he could participate in the FIRST LEGO League Jr. Program for another two seasons. This was when Tyler was introduced to WeDo programming. We signed up for FIRST LEGO League (FLL) in the last season too, and did both at the same time.

FLL was fun for Tyler and also very educational. He began to learn more advanced building techniques as well as coding by watching YouTube tutorials. By the time Tyler turned nine, he was becoming more serious about competing, and I felt he needed more coaching assistance than I could offer him.

An Introduction to VEX

During my search I discovered a local robotics club, offering FLL and VEX. I hadn’t heard of VEX robotics then, and was only vaguely familiar with the building kits sold at toy stores (not something I’d ever bought). I wanted to sign Tyler up for FLL but this club only offered that program for older kids.

I began to research VEX, to find out whether it would be a good alternative for my son. I found out that VEX was the biggest robotics competitions in the world at the time. They had an entry in the Guinness Book of Records to prove it.

VEX Worlds looked every bit as incredible as FLL Worlds, and I hoped Tyler could experience it one day. Besides that, I didn’t really know about the VEX IQ program, so I thought I’d let my son try a one-week summer camp and see whether he liked it. He actually loved it but wanted to continue FLL with his friends too, so we continued with that until Covid-19 struck.

Time to Pick Just One!

When the pandemic hit, we decided it would be too tricky to handle both competitions, and the best course of action would be just to choose one. This was a blessing in disguise actually, because we were overstretched. Tyler and I sat down and talked about what to do. The most important thing was which he liked better: FLL or VEX. Although Tyler loved LEGO and his buddies on the team, he chose VEX. I thought this was the right decision. VEX IQ was more suitable for Tyler for a number of reasons.

First of all, I felt that VEX was giving Tyler more real life experiences than FLL, and VEX also excelled at the engineering processes. Both competitions promoted the engineering process, but it is very hard to practice the process in FLL when most teams in the league only had one chance to test their chosen solution. We were only allowed one Provincial qualifier.

VEX was different. There would be four or five qualifiers and provincials every season. This meant you could learn something every time you attend a competition, and enjoy a richer, more immersive experience. Tyler was learning a lot, and being able to go to more qualifiers meant he could see whether his robots performed better or worse than others, if the code worked properly, learnings from team work, and more.

Regardless if your team wins or loses, you get to go back and improve on your solution, restarting the engineering process. You have a number of chances in a season to improve. As a result, I found Tyler’s knowledge grew at a much faster rate than if he had instead chosen the more limited FLL. With FLL, you could still come up with ideas after the qualifier but because you only had one chance, you would have to wait until the next year, by which time the challenge would be completely different anyway. 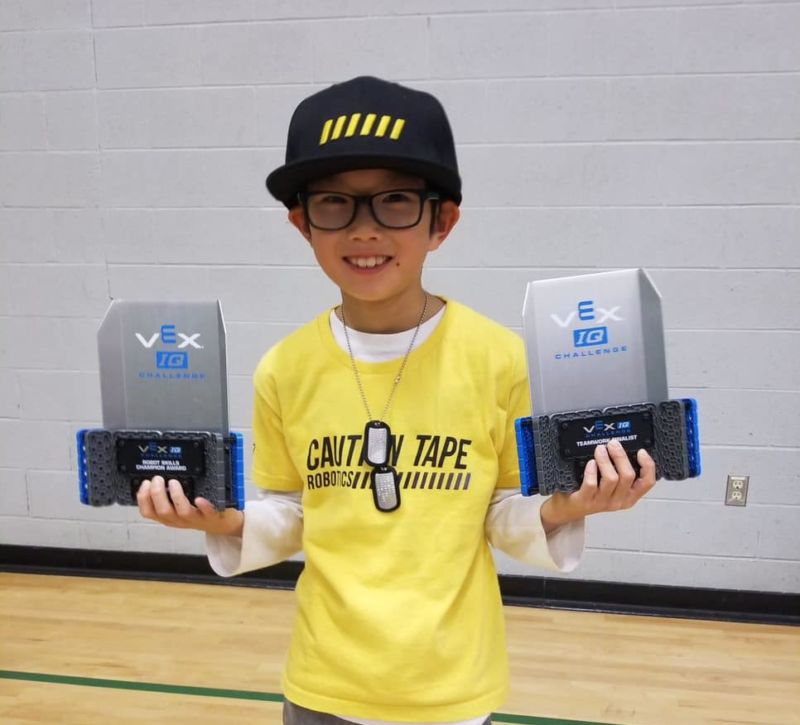 Another reason we preferred VEX was because FLL was more high pressure and less enjoyable since the kids only got one chance at the competition. Tyler wasn’t worried about the winning; he just really wanted to go to Worlds. But this meant he’d have to win the qualifier then the Provincial. There are very few qualifying spots in FLL as opposed to VEX, meaning even more pressure on the kids.

In addition, FLL had a much heavier workload, since every team had to build their own robot, code autonomous routines, complete a research project with a unique solution, and then present it to a panel of judges. Even in my son’s second FLL year, this was a daunting task.

For VEX IQ, on the other hand, you could build your own robot and learn some basic coding to make it drivable, using remote control to start. The kids are encouraged to code autonomous routines but don’t have to enter into a competition. They don’t have to do research projects for VEX either, although if the team wants to, they can. VEX IQ offers plenty of online challenges every year for the kids to choose from, meaning they get to decide what to do rather than being forced to do something they don’t really enjoy.

VEX IQ really helped teach Tyler about coopetition . Coopetition is one of FLL’s Core Values but kids don’t really get to experience it firsthand, because each team worked separately. VEX IQ matches every team up with another one for the team challenge matches. They had to learn to communicate effectively as well as working with multiple competitive teams numerous times to achieve a common goal together.

The kids learned to partner up in one match but still compete with them in other matches, which is the true meaning of cooperation. My son became friends with several kids from other competitive teams he was directly competing against, some of whom were his top rivals. I loved seeing Tyler sit and chat with two of the top teams from other clubs he’d lost to during the Provincials awards ceremony the previous year. This wouldn’t have been possible with FLL.

Something else I like is the fact VEX IQ has both elementary and middle school divisions, making it more fair to compete. Although winning isn’t as important as learning and having fun, it’s still a competition. Our team in FLL was always one of the youngest elementary teams competing against high school teams in robot performance as well as the research project and presentation. Younger kids find research projects and presentations difficult when pitted against much older kids because they lack the experience and development.

VEX IQ is more fun because of the remote control driving component. Kids love driving remote control cars, and VEX allows you to drive not just a car on wheels but a robot on wheels that can manipulate field objects. That’s actually my son’s favorite part. Tyler loves to build something and then drive it. If he isn’t totally happy, he will go back and try to improve his build through a lot of iterations. This driving component means VEX IQ should appeal to kids who might otherwise find STEM boring and prefer playing video games. The RC component is at least as much fun, or even more so, than video games.

I found the kids can learn most after losses than wins, as they were keen to figure out what they could have done better and learn from the other teams’ projects. However, it is rewarding as well as encouraging for kids to see their hard work translate into some kind of progress success. This is the fuel that drives them to learn more and do more.

I strongly feel that VEX IQ is the better option for a child who is really into robotics and also has a competitive spirit. Tyler really flourished in the past two and a half years with VEX compared to his three years in FLL. This isn’t to say FLL isn’t good, because actually it was a great starting point. However, VEX IQ took him to the next level and turned that curious spark into a fire!

To sum up, I think VEX and FLL are both educational programs and both can be fun. But I believe VEX IQ to be the most fun as well as the most motivating. It also encourages them to learn real life processes and skills. While Tyler still loves LEGO, we made the decision not to rejoin FLL next year when hopefully the pandemic is finally over. Tyler just loves VEX IQ so much more!

Join Our Champion Team to Start Your STEM Journey Today

Become Part of Caution Tape to Dream the Impossible.